How Does the New IEEE 1584 Standard Affect Me?

How Does the New IEEE 1584 Standard Affect Me?

If you are responsible for facility electrical operations, you may have heard of the recent updates to IEEE 1584 “IEEE Guide for Performing Arc-Flash Hazard Calculations.” The previous major edition of the standard was in 2002, and many changes have been made in the 2018 version.
Understanding what changed, why it changed, and how that bears out for incident energy calculations will help to clarify the impact on operations and maintenance. Here are some of the most significant changes we will discuss:

As an example of how arc flash assessments can change under the 2018 guide, an existing laboratory facility was used as a test case and is presented here. In this discussion, we will primarily be considering low-voltage systems under 600 V, although some may also pertain to higher-voltage systems.

The 2002 version of IEEE 1584 represented a broad industry consensus on how to calculate the heat energy that electrical workers may be exposed to during an arc flash. Although not perfect, it provided a better measure of AC arc flash hazards than those available before and, quoting from the introduction to the new IEEE 1584 document, “has been used with success throughout industry.” Through further research and testing, it was identified that the incident energy given by the 2002 model was too low or too high for some equipment conditions. The 2018 version provides a greatly refined model that incorporates more details of equipment configuration, resulting in more accurate incident energy calculations in many cases.

The same goes for incident energy. The next time you update your arc flash hazard assessment, prepare to see different incident energy values than before, even if the system configuration has not changed at all. Despite the breadth of these changes, many of the changes in incident energy may be small and, depending on your facility’s PPE standard, may require no change in the minimum PPE for energized work. The magnitude of the change is heavily influenced by the construction of the electrical equipment, as described next.

Two new required inputs to the model are the configuration of conductors inside the equipment and the size of the enclosure. IEEE 1584-2018 describes five different conductor configurations:

Most low-voltage work on energized panelboards (Photo 1), switchboards, motor control centers, or switches would be considered inside an enclosure (VCB, VCBB, or HCB). An example of an open-air installation would be pole-mounted overhead conductors. 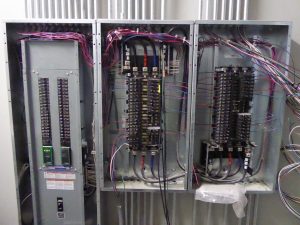 Photo 1. Phase conductors terminate down into the panel’s main lugs. As outlined in the
new version of IEEE 1584, this would be best modeled as a VCBB conductor configuration.

It is possible to encounter different conductor configurations within the same equipment depending on the work task. IEEE 1584-2018 Annex C provides some guidance on the selection of conductor configuration. For example, within a motor control center, the electrode configuration could be VCB or VCBB depending on the fault location. For low-voltage draw-out switchgear, a fault on the bus studs with a breaker racked out may correspond to the HCB mode (Photo 2). 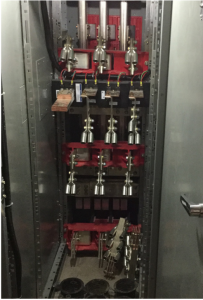 Photo 2. These draw-out circuit breaker compartments (as seen from the rear of a switchgear
cabinet under construction) house connections that run horizontally from the circuit
breaker stabs to the switchgear bus. Within the breaker cell, an operator would be
exposed to conductors in the HCB configuration.

Much higher incident energy may be predicted by the 1584-2018 calculations using the HCB conductor configuration compared to the 1584-2002 calculations, all else being equal. This is based on experiments which indicate that horizontal electrodes direct more of the heat toward the open front of the enclosure than vertical electrodes. Therefore, facilities that regularly perform hot work on switchgear or switchboard systems (such as racking in drawout breakers on a hot bus) may want to consider updating their arc flash studies since it is possible that incident energy is under-represented.

As previously mentioned, the size of the equipment enclosure must also be considered in the new model. Research has indicated that the walls of an enclosure reflect radiation from the arc back at the front of the box, resulting in higher incident energy compared to arcs in open air. Generally, the larger the enclosure, the lower the incident energy (all else being equal), since the heat is less concentrated over the incident surface. For “shallow” enclosures less than 20” in height and width and less than 8” in depth, this trend is reversed. Note that, unlike the choice of bus configuration, the selection of enclosure size does not affect the calculation of arcing current – only the incident energy.

Field data gathering efforts for arc flash studies seldom include measurements of box dimensions. Including this in future field data requests could benefit the accuracy of the study, but if this information is not available, appropriate assumptions based on the guide must be made. Table 8 in IEEE 1584-2018 contains typical enclosure sizes and bus gaps for various types of equipment. Selecting the minimum enclosure dimensions corresponding to the equipment type per Table 8 should yield a conservative result (for any “shallow” enclosures, the maximum size would yield the conservative result).

IEEE 1584-2002 included an exception for equipment rated 240 V and below and downstream of a transformer rated less than 125 kVA. Such equipment was not required to be considered in the study, and any required labels could report the incident energy to be less than 1.2 cal/cm2. 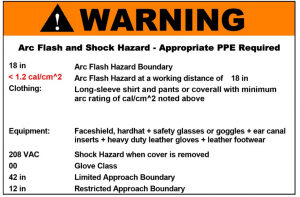 Under the previous IEEE 1584 guidelines, a panel on the secondary of a 112.5kVA, 480-208V
transformer would not need to be considered for incident energy calculations. Many times,
the incident energy at the arc flash boundary would be labeled as 1.2 cal/cm2 or below.
IEEE 1584-2018 now requires that this incident energy be calculated if the
available fault current is greater than 2kA.

The 2018 version no longer includes this exception in light of research demonstrating that arcs can be sustained at 208 V under some conditions. Instead, a new statement has been added which reads, “Sustainable arcs are possible but less likely in three-phase systems operating at 240 V nominal or less with an available short-circuit current less than 2000 A.” Therefore, equipment downstream of 480-208V transformers rated between 45 and 112.5 kVA may now need to be considered as part of the arc flash study depending on the available fault current. Furthermore, the low fault current and hence low arcing current on these systems often drives long interrupting times for molded-case circuit breakers, which can result in incident energy much higher than 1.2 cal/cm2.

Newcomb & Boyd conducted a study on a laboratory facility with 133 buses to compare the results using the IEEE 1584-2002 and 1584-2018 methodologies. The building is served by two medium voltage network transformers through a 480 V switchboard with a main-tie-main configuration. There are 3 MCCs in the building for mechanical loads. Lighting and plug/process loads are served by two busway risers, which are tapped off on each level with 150 kVA, 480-208 V transformers to serve the 208Y/120V panels on each floor. Several other 480 V panels are tapped off the busway risers to serve miscellaneous loads.

Enclosure sizes were selected based on Table 8 in the 2018 guide. Because larger enclosures typically result in lower incident energy, the minimum enclosure size corresponding to the equipment class was selected to obtain a conservative result. No equipment in the study could be definitively classified as “shallow”.

The incident energy calculation results with the two methods were closely compared. One of the more significant deviations occurred on a 208 V panelboard that fell under the 125 kVA transformer exception in the 2002 guide and was therefore assumed to have an arc flash hazard less than 1.2 cal/cm2. The incident energy as calculated with the 2018 model was 11.6 cal/cm2, which would require significantly greater PPE to protect against if the panel was worked hot. The other 132 buses in the system exhibited a 22% decreased in incident energy on average. Using the NFPA 70E breakpoints for PPE category (1.2, 4, 8, 25, and 40 cal/cm2), a total of 5 buses went up in PPE category (higher-rated PPE) and a total of 9 buses went down in PPE category. The change in incident energy for all the other buses in the system was not significant enough to trigger a shift in category using the above breakpoints.

This is just one example of one building, and time and experience may provide more insight into how the new 1584 may affect the study results at different types of facilities. Depending on the type of equipment involved, the PPE required to protect from energized work hazards may change significantly with the new guidance. Regardless, NFPA 70E and OSHA continue to preclude most energized work, except where de-energizing results in a greater hazard or is truly infeasible for the work itself to be performed. Establishing an electrically safe work condition is always the safest way to work on electrical equipment.

“How Does the New IEEE 1584 Standard Affect Me?” was published in the February 2019 edition of the Electrical Construction & Maintenance (EC&M) Magazine.
Author: Mitch Costley, PhD, PE