The design-build delivery method was used for the U.A. Whitaker Biomedical Engineering Building at the Georgia Institute of Technology, and the schedule was aggressive: 18 months from beginning of design until substantial completion of construction. Although Leadership in Energy and Environmental Design (LEED) Green Building Rating System certification was not a project requirement, the building still has many green elements. This article describes how the design-build team incorporated green concepts into this non-LEED project, and highlights sustainable features of the architectural, electrical and HVAC systems.

Design for this project began in January 2002. At that time, Georgia Tech wanted a LEED building, but the certification process had not been included or accounted for in the program of requirements. In order to assess the feasibility of providing LEED certification, the design team developed a worksheet to determine which credits might be achievable.

Over the course of approximately two months, the list was honed to a final potential quantity of 14 probable (yes) credits, with an additional 27 possible (maybe) credits. The anticipated premium to incorporate these items into the project would have increased the design and construction costs for the building. Unfortunately, the budget was fixed and additional funds for a LEED consultant and documentation (as well as additional design time) were not available. The design-build team and Georgia Tech agreed that the short schedule and limited budget would not allow for formal pursuit of LEED status for this project; however, the requirements of as many LEED credits as possible would be met. 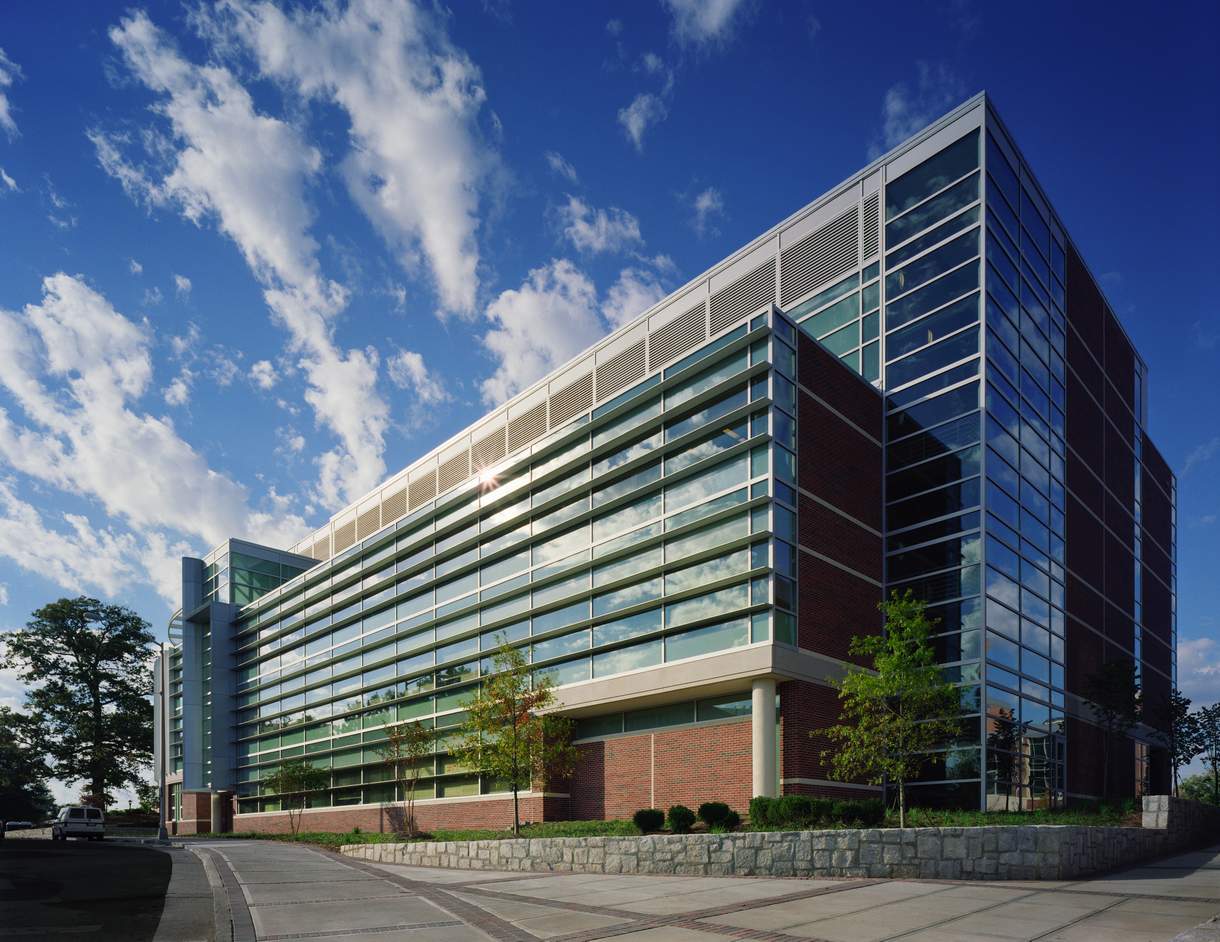 While providing a striking visual impact, the exterior skin also serves as an important sustainable design feature for this building. In contrast to the more traditional brick construction of the two adjacent buildings, most of the north, south and southwest exposures are glass. Even though all three buildings are a part of Georgia Tech’s new Biotechnical, Environmental and Molecular Complex, the glass Whitaker building draws attention to itself.

The beauty of this skin goes beyond aesthetics. The glazing layout was designed by the architect to maximize visible light admittance while minimizing both cooling loads and direct sunlight at eye level. Various combinations of translucent glass, fritted glass, and high performance vision glass were analyzed to determine which resulted in the lowest heat gain to the interior. This was a collaborative process between the architect and HVAC engineer: there were several design iterations, each of which was modeled in a computerized load calculation program so that the layout resulting in the smallest airflow requirement to satisfy cooling loads could be selected. The final system consisted of approximately 25 percent fritted glass, 25 percent translucent glass, and 50 percent vision glass.

In order to reduce solar radiation, the exterior of the building was further enhanced with sunshades, and users requested operable windows for the offices. Because the building is divided into separate and distinct laboratory and office zones separated by a multilevel lobby, operable windows were provided in the offices to allow natural ventilation if desired, while not impacting laboratory operations. 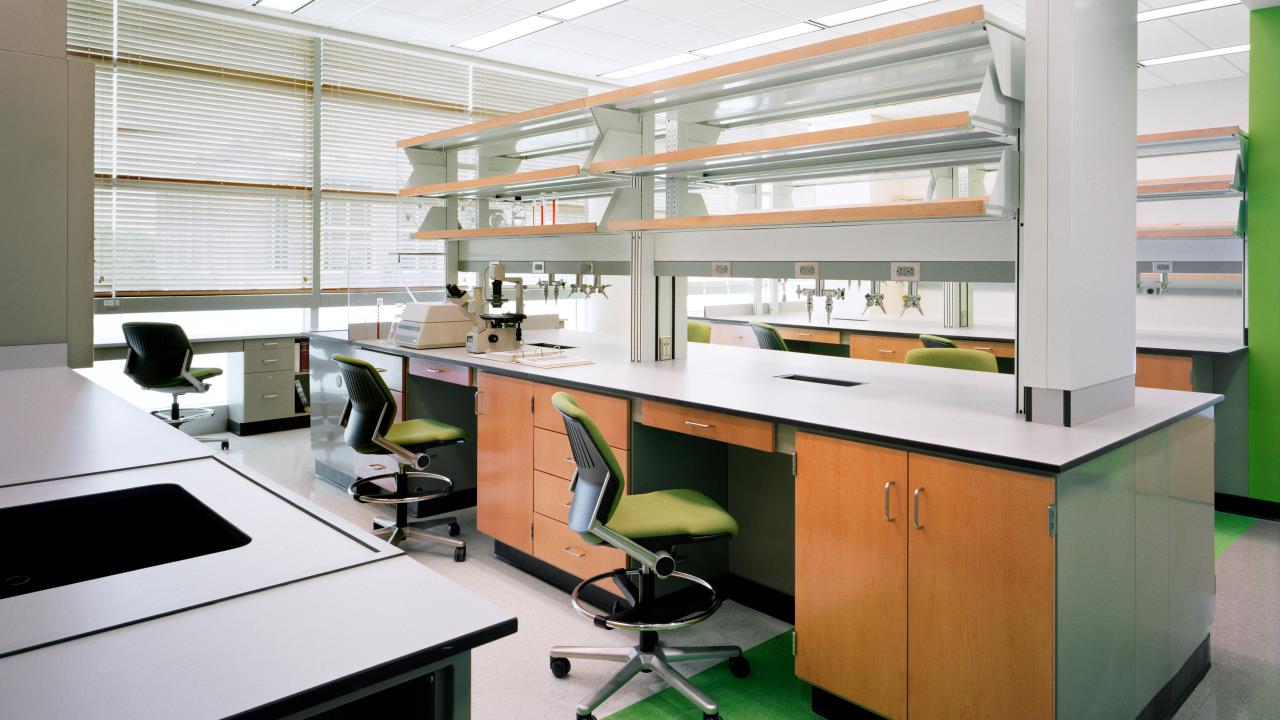 HVAC plays an important role in the functionality of a laboratory. These complex systems must maintain minimum ventilation requirements; provide adequate make-up air and maintain specified face velocities for fume hoods; and satisfy space pressurization, heating, cooling, and humidity needs, all without producing excessive mechanical noise. The HVAC system for this building was designed to reduce energy consumption while maintaining the interior conditions at a comfortable level to keep occupants healthy and productive.

Laboratories are typically required to have single pass HVAC. This means that all air that is introduced into the space is exhausted with no air returned to the central air handling equipment. The reason this is done is to avoid circulating chemical vapors throughout the building. In order to comply with requirements for single pass air to laboratories, and to provide flexibility for future reconfigurations within the building, a 100 percent outside air system was specified. Two air handling units, sized at 45,000 cfm each, serve the entire laboratory wing. The supply ductwork from each AHU is cross-connected on each floor to allow continuous airflow throughout the building (even if one air handling unit is down for servicing or routine maintenance). This feature is important because the exhaust fans run continuously, and the building would become Commissioning helped to excessively negative with respect to outside air if the entire supply system was deactivated.

The capacity of the HVAC system was selected based on the highest airflow demand due to ventilation requirements, fume hood make-up air requirements, and cooling load requirements for each space. Thanks to judicious selection of glass, heat gain from the outdoor environment was kept to a minimum. In addition, the air handling units use variable frequency drives to control fan speeds in order to provide only as much air as necessary. Because the horsepower requirements of a fan increase with the cube of its speed, minimizing fan speeds results in significant operating cost savings.

A manifold system was chosen for laboratory exhaust. This method allows uncontaminated room air to be combined with fume hood exhaust. As a result, the quantity of fans required is reduced, while contaminant dilution is maximized. The common exhaust plenum is served by three roof-mounted fans for redundancy. The fans are the high plume induction type, which provide further dilution to the exhaust air stream. Stainless steel ductwork was specified for corrosion resistance and long life.

A sophisticated laboratory airflow controls system maintains space pressurization relationships, space temperature control, minimum ventilation rates, and fume hood face velocities simultaneously. The fume hoods and airflow controls are variable-volume type for energy savings. Pressure independent air terminals modulate as required to maintain constant face velocity regardless of sash position. The control sequence was designed to keep energy consumption down, while still maintaining a minimum ventilation rate of 10 air changes per hour and comfortable space temperatures. It also keeps the laboratories negatively pressurized to contain odors while simultaneously keeping the overall building positively pressurized to prevent infiltration of unconditioned outside air. The system has the ability to operate in a reduced airflow mode to save energy when occupants are not present.

While the laboratory wing required 100 percent outside air with high efficiency filtration, the office wing did not have these constraints. Therefore, to save first costs and operating costs, the office wing was provided with its own separate air handling system. A variable-volume recirculating air handling unit was used. It is also equipped with an airside economizer cycle to utilize outdoor air for “free” cooling when the ambient temperature is less than the indoor temperature.

Other energy saving features of the HVAC system include variable-flow hot and chilled water pumping systems with variable frequency drives, and energy efficient motors for equipment loads of 1 hp or larger. 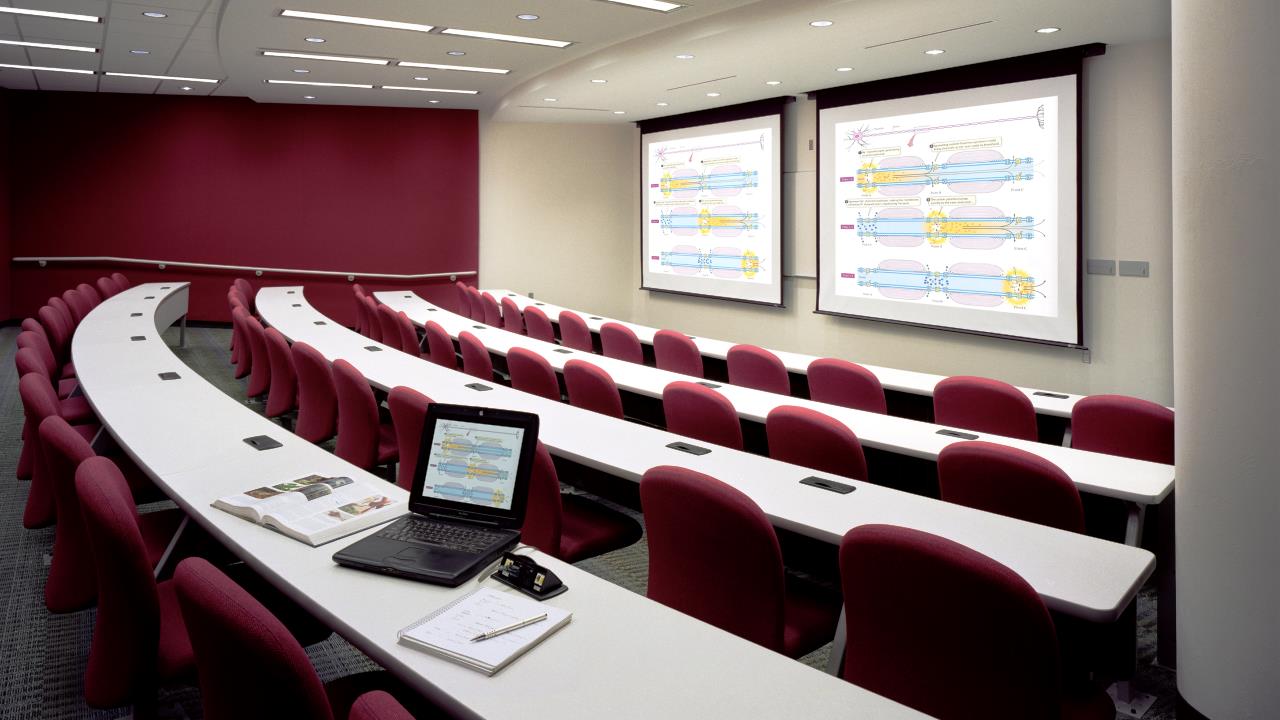 Sustainable design is present in the electrical system as well, most notably in the lighting. For a building such as this, lighting can be expected to be responsible for approximately 25 percent of the electrical consumption. Several steps were taken to minimize this load.

For example, all laboratory spaces were provided with 1 by 4-foot lay-in prismatic fixtures with high frequency electronic ballasts and two T-8 lamps. The fixtures are arranged in rows spaced 5 feet apart, and for each laboratory the lamps are alternately switched to allow users to select between having none, half, or all of the lamps on.

Lighting fixtures in offices and classrooms are 2 by 4-foot lay-in parabolic type with three T-8 lamps. These spaces are provided with inboard/outboard switching to allow users to select between none, 1/3, 2/3, or all lamps on. Compact fluorescent lamps are used for public spaces, and lighting is automatically controlled by the building automation system. Exterior lighting is automatically controlled by a photocell. 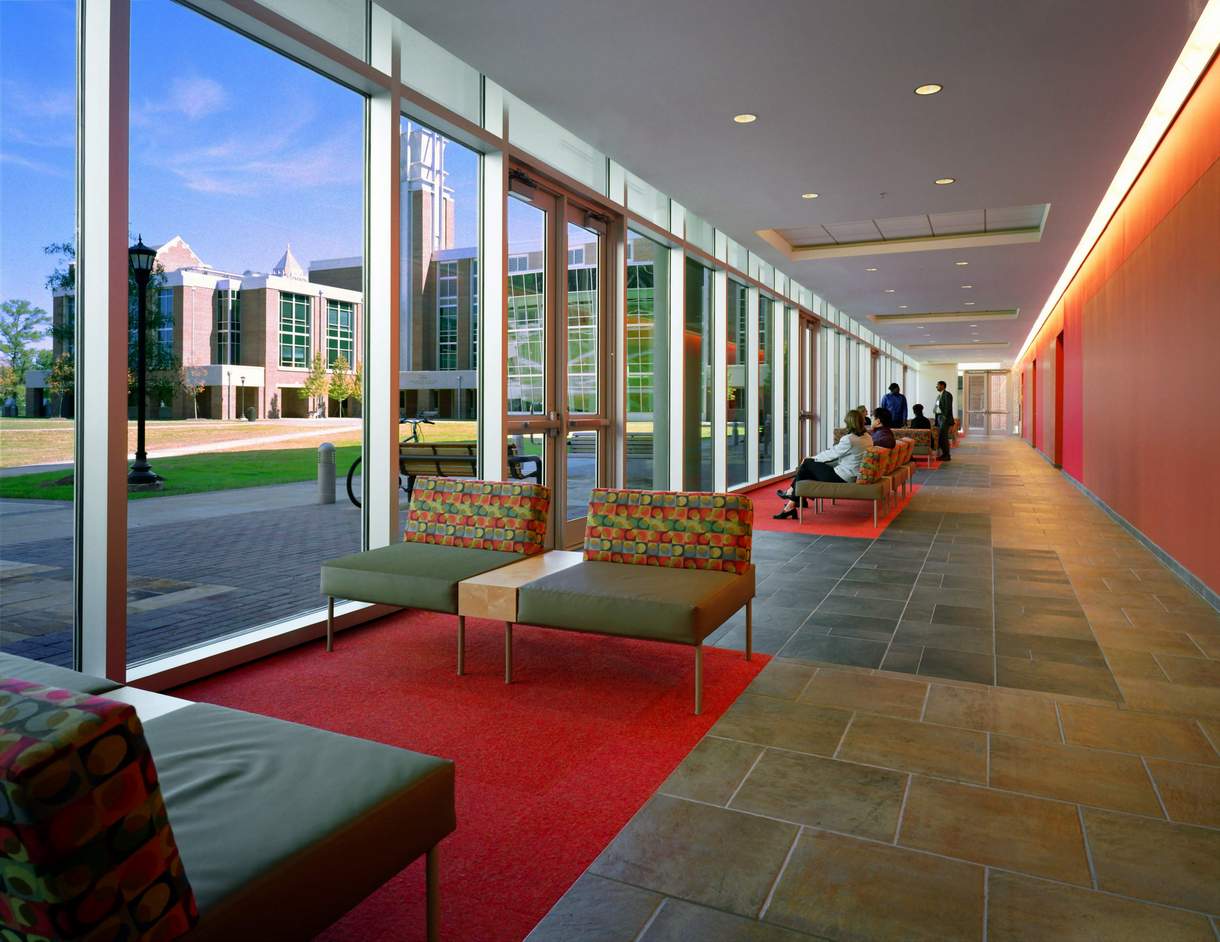 In order to confirm that the finished building performed in accordance with the requirements of the design documents, a commissioning authority was hired directly by Georgia Tech. The commissioning process resolved several unanticipated operational issues that always seem to present themselves at the end of a project. The effectiveness and value of this service are manifested by the fact that as of several months after completion, no temperature complaints had been received from the building occupants.

Sustainability is likely to continue to gain acceptance and will play an increasingly prominent role in construction for the foreseeable future. Sustainable design tends to be perceived as adding cost to a project, but this building serves as an excellent example to the contrary.

“Green Building Design for Non-LEED Projects” was published in the December 2005 edition of the Environmental Design + Construction magazine.
Author: Eric A. Myracle, PE

Associate Partner, Mechanical Engineer
Eric has 22 years of mechanical engineering and project management experience with a variety of building types, including health care, laboratory, academic and judicial facilities. He has published and presented on the topic of sustainably designed buildings. Email Eric

Caring for Patients and the Environment